“When the way is not clear, stall.”—Anonymous, or maybe that was me

Because no Grand Vision had yet presented itself to me, I conceived the notion that once the existing lawn and its shrubby accoutrements were gone I would have the empty space I needed for said Vision to manifest itself—hopefully all at once.  So we removed some bushes and decided to remove the lawn in a delightfully sustainable, solar-powered manner we’d seen in an organic gardening magazine.  This method consisted of covering your lawn for a few weeks with black plastic and letting the sun do the rest–it would kill the grass, humanely, with no suffering, and turn the blades and decaying roots into a sort of mulch carpet that could be–voila!–or, as some of my friends say, viola!—easily be pulled up with a flourish, just like wall to wall.  So the article said.

What a couple of goobers.  We’ll apparently believe anything.  The black plastic made the yard look like we were covering some sort of menacing biohazard; also, since we didn’t have one single piece the size of the front yard, we were laying it down in squares (we pressed the grandchildren into dropping bricks onto crucial seams).  Even so, the wind got under the pieces and they flapped away, exposing dead beige grass and strewing bricks about.  It was quite a bold environmental statement for a number of months, and if you have an HOA, you should not try this at home. 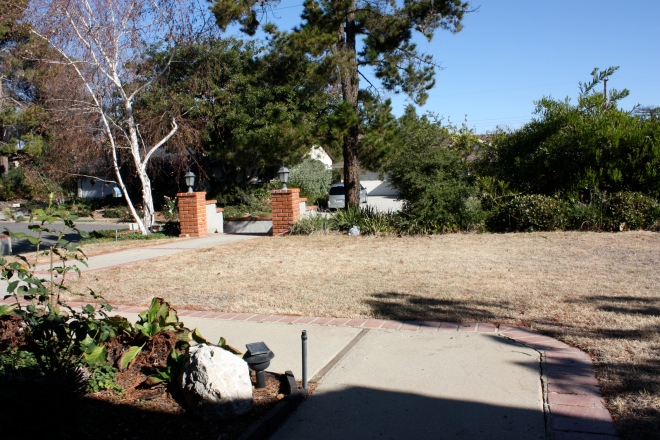 The results of our solar experiment, minus the black plastic. The birch tree in the left corner would become a casualty of the experiment.

We were still left with a tightly packed mass of dormant-but-waiting grass roots, though, and eventually we knew that the better part of valor would be to hire someone with more experience, and loads more expertise than we had between us.  Thank goodness for Miguel, the calm landscape professional who’d worked with us on our backyard project, where we’d learned not only what a professional he was; how possessed of equal measures of patience and wisdom, but also how skilled he was at maintaining a straight face at some of our magazine-generated ideas.  Miguel felt the thing to do would be for him to bring a few of his men with pick axes and shovels and just dig out the soil containing our former grass and their far too lively roots, and carry them off.  Sold, we said, and then we were staring at a big, grass-free blank space, without a clue about what to do. 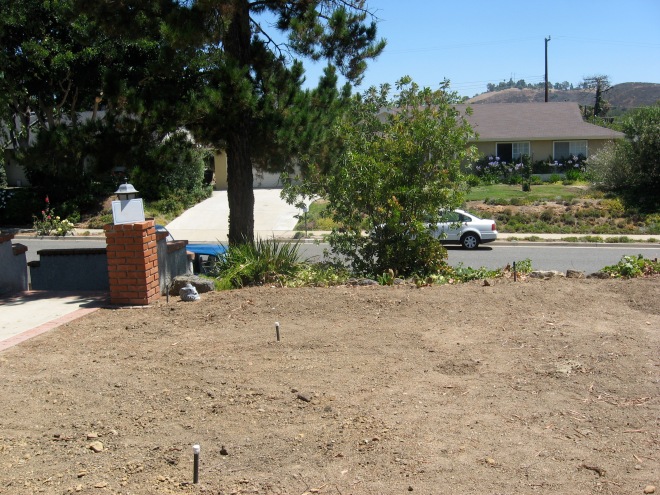 2 thoughts on “How not to plan a landscape, part two: going to ground”

The Middle Ground: Gardening in between

Confessions of a Hawaiian Princess: One Woman's Journey to Greater Health

Propelling an Ordinary Existence into One of Undreamed of Possibilities

The latest news on WordPress.com and the WordPress community.